I saw Jurassic World last Friday. Since then, a lot of people have asked me what I thought about it. They plan to see it, and they want to know what to expect. Every time I’m asked, I say, “Good dinosaurs.” I tell them that: 1) Because it’s true—the dinosaurs are pretty good, and 2) I have nothing else positive to say, and I don’t want to ruin it for them.

Jurassic World is garbage, and the fact that it’s made a billion dollars and has a 71% rating on Rotten Tomatoes appalls me. 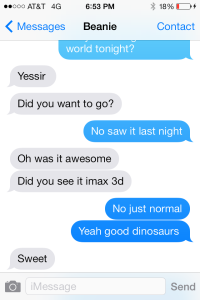 I’m going to tell you why it’s garbage. Now would probably be the time to give a spoiler alert, but I refuse to do that—you cannot spoil garbage. Plus, if you’ve seen the trailer then you know the entire plot: An extra mean dinosaur stomps around and murders some people. There you go.

Why Jurassic World is garbage

Subplots: There are 1,000 of them, and none support the actual story. For instance, the kids’ parents are getting a divorce. There are only three references to this.

1. After dropping their kids off at the airport, the dad says, “So much for a family breakfast.” The mom gives him the stank eye and responds with something like, “Why did you have to say that?” Clearly, they hate each other. (Also, let’s ignore that this exchange MAKES ZERO SENSE IN THE CONTEXT OF THE SCENE. The kids got dropped off at the airport. Didn’t you know they were going on a trip, dad? Why are you so upset you didn’t get to eat breakfast with them? You could have stopped at McDonald’s or something, you B-hole.)

3. At the end, after lots of people died but their kids didn’t, the parents arrive at the park holding hands and looking relieved. Divorce averted!

That’s just one example, but there are lots more. The older brother, Zach, is jerky to his girlfriend and creepily stares at pretty girls. Claire, the main character girl, gets pressured to have babies. She’s also a crappy aunt. None of the subplots are developed, interesting, or at all significant to the main story. THEY’RE DUMB AND THEY SUCK.

Romance: I already mentioned the marital troubles between the kids’ parents and the older brother’s hornidogginess, but those fools aren’t even the worst offenders. The two main characters—Claire and Owen—are the worst.

Look at these fools.

Apparently Claire and Owen had gone on a date before and hated each other. She was too uptight, he was too laid back, and neither was down to clown. After a couple minutes fighting dinosaurs together, though, they fall deeply in love. Nobody falls in love that quickly, especially under that much stress. Do you know how stressful it must be, getting hunted by dinosaurs!?! Claire works at Jurassic World—her customers are getting pecked to death by dinosaur birds—and she and Owen are just chilling, ogling each other and making out.

Dinosaur behavior: I said the dinosaurs are good because they look good. They do not act good. They are irrational as eff.

Here’s the dilly: In order to attract more people to the park, geneticists spliced the DNA of a bunch of dinosaurs (and non-dinosaurs) to create the baddest bitch dinosaur of all time. Her name’s Indominus Rex, and she a mothereffer. Such a mothereffer, in fact, that she escapes her cage to go on a killing spree. Everyone tries to stop her but can’t because, like I said, she a mothereffer.

Owen is an ex-Navy man who takes the lead on the Indominus Rex hunt. Before that, though, he trained Velociraptors. He had a pretty good handle over them, even claimed to be their alpha.

Some dude named Hoskins at the training place—whose title and authority were never disclosed, I don’t think—believes raptors would make A1 soldiers. Owen disagrees, but Hoskins doesn’t care and decides to send the raptors out, alongside humans, to fight Indominus anyway. Turns out Indominus is part raptor, so the other, full-blooded raptors immediately change allegiance from Owen to Indominus. They start trying to kill humans ASAP. They eat Hoskins.

Then Owen looks his favorite raptor, Blue, in the eye in a meaningful way and just like that regains his trust. All raptors are back on board, ready to fight Indominus.

BUT the raptors are weak compared to her, and are getting their asses kicked. Claire says, “Hey, maybe T. Rex will be down to join the cause.” She makes someone open T. Rex’s gate. Even though he’s a mean mofo too, he immediately starts fighting Indominus. She kicks his ass, so the raptors pitch in to help T. Rex take her down. Then the water-dwelling Mosasaur says, “Yeah I’ll help too” and he eats Indominus. At the end of the scene, T. Rex looks at the raptor like, “Should I eat you now?” Raptor looks scared and T. Rex shrugs and walks away.

WOULD DINOSAURS REALLY BE THAT SWEET AND HELPFUL? I think not. Dinosaurs are cool as hell, but I’m pretty sure they’re not particularly sweet or helpful. I’ve never met any, so I don’t know. Maybe the herbivores are—Brachiosauruses seem chill—but T. Rexes and Velociraptors do not.

To everyone who wants to know if Jurassic World is any good: It is not.

Chris Pratt is pretty dreamy, though.