Needless to say, it really skinned the skin off my mole-ridden back when I surpassed the maximum trick-or-treating age. It happened in 7th grade — my armpits sprouted hair, my chin sprouted pimples, and my body sprouted a milk gut (actually this all happened a few years earlier, I just didn’t acknowledge it until 7th grade). It was time to hang up my double-layered Shaw’s bags and retire the Beavis mask I’d rocked for the past five Halloweens. 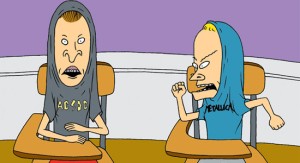 So am I, but a sluttier version

I was 13-years-old and instead of sorting through my candy collection, I was sitting at home with my parents watching Halloweentown (one of the best DCOMs of all time). My dad had probably just cooked spaghetti with meat sauce, I’d probably just eaten three servings of it, and the torn, yellow pit stained T-shirt I was wearing was probably covered in red tomato stains. On any other day, it would have been a normal, down azz evening. But on Halloween, it sucked big ol’ biggity balls.

My dad could tell I was bumming. So, being the supportive father that he is, he told me to go trick-or-treating anyway. If he swore, he would’ve said something like: “You like candy and shit, and shit! Me too! We rollin, bitch.”

Because it was such short notice, I didn’t have a costume. Well, I still had the Beavis mask, just no time to write “Metallica” on a fresh blue tee. Once again, my dad came to the rescue. He handed me his leafy camouflage hunting suit.

The only hunting my dad did was sitting in a tree stand reading, napping, and using binoculars to watch deer as they passed by. As a result, he didn’t really need to use the camo suit, and he hadn’t stored all the pieces together. He had the pants and the top, but the hood was missing. I came up with a solution. 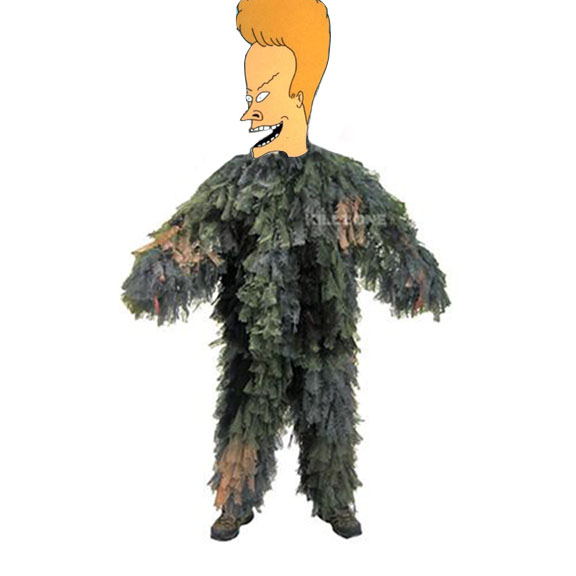 I was 13 — an age when most kids exchange trick-or-treating for parties with friends — wearing a camo leaf suit and a huge, rubber Beavis head. I was approaching neighbors’ doors by myself, my dad trailing close behind in the family mini-van.

I must have recognized how strange the situation was because I did my best to avoid other trick-or-treaters. I was embarrassed because of 1) my age, 2) my solitude, and 3) my big, leafy, Beavis costume.

So I was pretty pumped when my branches rustled into an 8th grader from my field hockey team (apparently if you go with friends, it’s okay to trick-or-treat when you’re old).

Her name was Savannah; she was semi-popular — certainly more popular than me — and was working hard to blow up my spot. She, her group of friends, and I happened to walk up to the same house at the same time. She started yabbing something about Halloween to me and, in fear that she might recognize my weirdo foreign-sounding voice, I played dumb. I didn’t say a word.

Literally. I didn’t respond to anything she said, even when she directly asked me who I was. I kept my Beavis head on straight and worked that leaf suit like I ain’t never worked a leaf suit before. By the time she gave up, I was more than ready to jump in the van and tally up my haul.

14 thoughts on “A classy Halloween”