At times I forget how much I love America. Then, the Fourth of July comes around and I says to myself, “You dumb bitch, you were Benjamin Franklin in a former life – how could you forget to love the child you founded?!” Then, I eat four hamburgers, fart, and take a nap.

I am genuinely convinced that, between January 1706 and April 1790, my soul and Benjamin Franklin were the same dang thang. It’s taken 12 years to confirm, but let me tell you: shit’s been confirmed.

My 4th grade class put on a play about two kids who time traveled to 1776 and homied it up with Benjamin Franklin. Even though I couldn’t pronounce the letter “R,” was still recovering from diphthongs and the letter “S,” and sounded like a mentally challenged British baby, I tried out for the lead role – Benjamin Franklin. I got the part, too (probably because 1) Ryan, my sole competition for the part, was an annoying arseholio; 2) I made a damn fine Mr. Franklin).

All the kids in the trailer park at Breakwater Village organized a parade for the Fourth of July, and I offered to reprise my Candle Boy. I killed it. 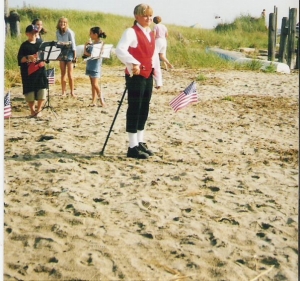 That's the same cane I used for the 4th grade play... it had a hidden sword inside! Fun!

Mrs. A.C.-Slater-Hair-Doo-Teacher had us make our own hand puppets for a 6th grade puppet show. I asked my dad to help me with a leather Benjamin puppet. He ended up making the whole thing, it was awesome, and it’s still on display in my room.

While I sat in a tree, engrossed in a Benjamin Franklin biography, the sound of my sister screaming interrupted us. Without a second’s thought, I threw the book, jumped the five feet from the branch, and ran to her rescue. For the second time, I became an American hero.

For a summer assignment in A.P. U.S. History, we had to write an essay on an influential American. I chose Ben, of course, but totally misunderstood the assignment. Still got a B, doe.

I stay reading about, quoting, and loving Benjamin/myself.

2 thoughts on “Mr. Franklin if ya nasty”