Like most people, I go through bouts of super productivity (working, cleaning, exercising) and bouts of super laziness (watching MTV Jams, sleeping, not addressing the sand fleas living in my body). I’ve spent most of the past few years in the latter category, but the other day I ate some high fiber pancakes and decided I was ready to make the switch. It’s finally time to flip modes.

To start off this new era, I set some goals for myself. The first is to become a mascot, and the second is to compete in a triathlon (a short triathlon, I ain’t tryna be one of those pants shizzers).

Since I’ve completed number one… 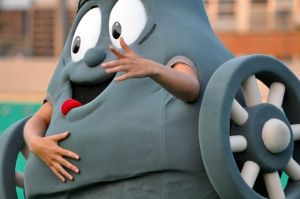 …I’m now focusing all my energy on number two (like I do). It’s time for me to become a triathlete.

I’m already in the process of becoming one, actually. I’ve started swimming and everything!

In fact, the other day as I walked to the beach for a quick swim, my neighbor/fellow triathlete stopped me to ask how my training was going. He and his wife are the most positive people I’ve ever met (I’d accuse them of being on E but the one time I asked them for some they played dumb) so when I told him the distances I’d been doing he was really encouraging. After hearing I’d swam an incredible eight laps, his mouth dropped open, he crapped his pants, and gasped, “You a swimmer!”

Ironically enough, just a few years ago a swim instructor told me the exact opposite. That time, though, it was in the middle of a lifeguard certification course.

Sophomore year of high school, I decided to become a lifeguard. I had no idea where I’d work, but it sounded like a glamorous job and I figured I could pull in 20 thou. a summer, easy. I asked my mom to sign me up for a Saturday certification course at YMCA. She did, and within a few weeks I was parking my car at the Biddeford Y, ready to get my lifeguard on.

I checked in at the front desk and a frizzy haired lady gave me the once over, made me wait ten minutes, and then finally showed me to the locker room. There, after tugging off my clothes and on a striped Target bikini, I headed to the pool where my new Baywatch life awaited me.

Apparently it had been awaiting me for a while. When I burst through the locker room doors and into the pool area, I saw all the other lifeguard hopefuls already sitting on the bleachers, wearing their goggles and swimming caps and one-piece Speedos, listening to the certification coordinator.

And there was me — the late girl, the giant barefoot girl in a striped bikini with not so much as a pair of goggles to keep back her untethered Jesus ‘doo.

After mumbling an apology, the course began. The first test was lap swimming. We had to find a partner to count our laps. All the other kids, who’d been taking swimming lessons for the past few months (I know because I’m a good eavesdropper), paired off with their friends. Having no friends, I timidly asked some redhead  if she’d help a sister out. Her body was telling her no, but her miiind, her miiiiiind was telling her yeee-uuss. She shot me an “I hate you” face, sucked her teeth, spit in my eye, and said, “Sho.”

I totally understand her reluctance. For one, I looked like an idiot. For another, I didn’t even know how to count laps. Most of my swimming experience had been battling waves on a boogey board, not swimming laps in a GD pool. Was I supposed to count each time she got to one end, or just when she went down and back? I didn’t, and still don’t, know the answer to that question. I just didn’t count her laps. She was not thrilled.

Redhead: What am I at?

After 20 minutes or so, my turn came around. I swam ten minutes without interruption before the instructor yelled at me to tie back my hair. A few more minutes passed before the cramps set in and the doggy paddle took over. Soon after that, the instructor got my attention and beckoned me out of the pool.

I got out but first had to wait for her to finish her conversation with some boy. This kid, dressed in a ridiculous pair of beach trunks, had been struggling with his laps like some poor Joe straight off Old Orchard Beach. She must be telling him to give up, thought I. What a loser, double loser, click to go together, whatever, moron, as. If.

My suspicions were confirmed when he headed for the locker room door with a defeated look upon his bathing cap-less headface. He just didn’t know what to expect — I didn’t fault him for trying but I couldn’t help but chuckle at his embarrassing attempt. I had time to think “Better luck next time, homie,” before it was my turn with the instructor lady.

I didn’t really want to be a lifeguard, anyway.

2 thoughts on “How to become a lifeguard”